Elizabeth Abegg from Spell and the Gypsy Collective 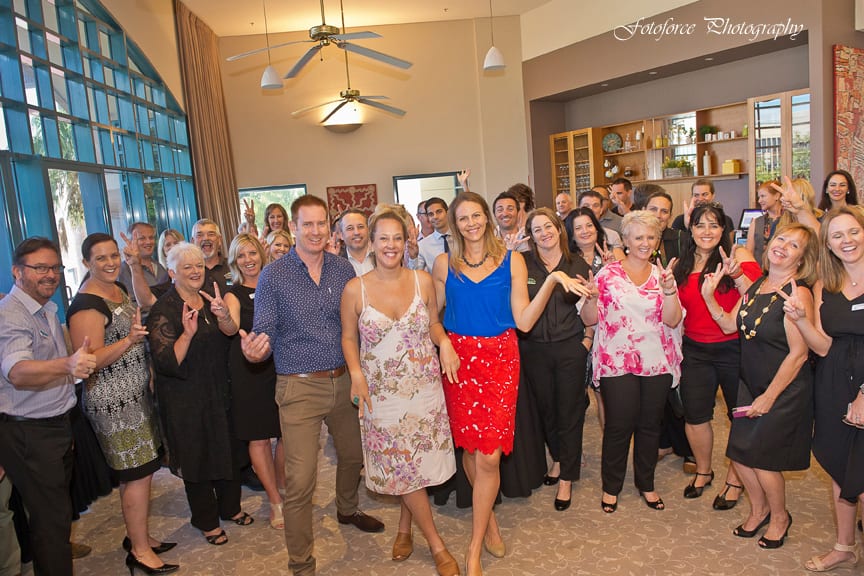 But then Spell and the Gypsy Collective’s dramatic rise to success doesn’t exactly follow your usual business model either.

Take two sisters, living in Byron Bay, not much money between them, no formal business training, and no clear plan who evolve their weekend market stall into global fashion and lifestyle brand with a cult-like following.

Elizabeth Abegg – one half of Spell and the Gypsy Collective – shared the Spell story over breakfast with members of The Business League at Bond University last month [March 1 – check blog pub date].

Dressed in a cream floral Spell slip dress with her blonde hair gathered in a loose pile on her head, Lizzy is down-to-earth and refreshingly open in her delivery.

It was a bad breakup that led Lizzy to leave her Bondi beach pad and her career as a film editor to join forces with her sister, Isabella Pennefather, in Byron Bay where she was selling her handmade jewellery designs at the local markets.

Lizzy says the response they received directly from their customers at the markets each weekend kept them going when the major fashion retailers and magazines weren’t interested in such a small, unknown label.

Listening to Lizzy it’s clear that their creativity, passion, persistence, people skills, quality, and authenticity saw them survive those early days before business was booming.

That was eight years ago and Spell has since expanded from jewellery into fashion, accessories and homewares. Their unique, vintage-inspired designs ooze with boho-beach-babe-meets-modern-gypsy appeal.

Today Spell consistently turns over a million dollars a month, has more than million followers across their social media platforms, employ more than 50 staff and have a flagship store favoured by famous types.

They were named Australian Business of the Year at the 2016 Telstra Business Awards.

While the girls’ combined creative talents provide the foundation for Spell, it is social media, in particular Instagram, that took their designs to the masses.

While Isabella was busy designing and creating, Lizzy had Spell’s finger in every social media pie going.

She started a blog (well before they were popular) and used to her story-telling skills to inspire high-quality, beautifully styled images which she posted on social media.

The other big big thing Lizzy did (and continues to do) is to interact with their fans online, bringing them along for the ride every step of the way.

The introduction of Instagram in 2010 took business growth to a whole new level— Spell now has 739,000 followers on Instagram alone.

Rapid growth has been a major challenge for Spell, who did their first million dollar month in their 5th year of operation (they began in 2009 and did it in 2014).

Nearing the end of her talk, Lizzy shares with us an unscripted story about a potentially disastrous situation in November last year when the Collective experienced a month of 400% growth.

Partly owing to some recent changes in their distribution set-up, the influx of orders was more than their systems could handle. Lots of online orders were going missing and running late, and customers were angry and upset. Many took to social media to vent their frustrations.

Lizzy says she made the decision to be totally honest with their fans and customers, and took to social media to explain exactly what had happened. She also contacted every affected customer directly to apologise.

Testament to the strength of their relationship with their online community, it worked. Lizzy says the whole situation turned around as people who started out angry became more understanding and appreciated their total transparency.

In their eight years of operation, Lizzy says they’ve spent a minimal amount on traditional advertising, marketing or PR. Instead, they’ve invested time on social media and email, and are reaping the rewards.

Lizzy offered up these ROI stats on marketing:

Lizzy says their database is still their most profitable avenue and argues that blogs, for them anyway, are definitely not dead — they get 80,000 page views per month on their blog sites.

When asked if, given the time over, there’s anything she’d do differently, Lizzy doesn’t hesitate with her response: ensuring the ethical standards of their supply chain around the world.

Spell has set itself a goal of having 100% of their factories audited and accredited by third-party, internationally recognised auditing bodies.

It’s those kind of high standards and core values that underpin the Spell success story.

Growth — either too much or not enough — it’s a common challenge faced by the businesses we deal with at Lead a Better Business. If you’re struggling to scale growth in your business, please join us at our next free training webinar when we tackle the 3 big challenges faced by business: growth, time and staff. You can find out more here

Fun as a Business Focus

The Secret to Consistency

The Party was SO GOOD!